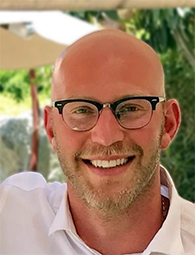 Steffan Alexander Lazerow is an associate attorney at Romero Park, P.S. His practice focuses on business law, with an emphasis on litigation, business advising and intellectual property. Prior to joining Romero Park, Steffan worked for a large firm in San Diego successfully handling real estate litigation, financial services litigation, and debt collection matters for a diverse collection of the nation’s largest banks including JPMorgan Chase Bank, Wells Fargo Bank, Bank of America, and Citibank, as well as a number of smaller loan servicers, lenders and other financial institutions.

Steffan earned his J.D. from Loyola University of Chicago School of Law, where he was a member of the Dean’s List nearly every semester. Steffan worked part-time during his three years of law school, clerking with a defensive litigation firm, a mass-tort firm, and a personal injury firm. Steffan spent a semester as a judicial extern for the Honorable Judge Sanjay T. Tailor, Commercial Calendar, at the Circuit Court of Cook County, State of Illinois, in Downtown Chicago. Steffan spent the summer between his 1L and 2L year abroad with the University of Georgia School of Law, studying EU trade law in Brussels, Belgium and Geneva, Switzerland.

Steffan is licensed to practice law in California and Illinois.

Steffan was a student-athlete at the University of Rhode Island and University of Maryland, where he was a varsity letterman, a member of the Dean’s List and ACC honor roll.

Steffan has the mind of an entrepreneur and is constantly scheming of new business ideas. He works out six days a week, meditates every morning, and considers himself a professional lifestyle hacker.

Steffan met the love of his life, Mackenzie Fultz, at a music festival in Rothbury, Michigan, and plans to marry her sometime soon. Mackenzie is a wedding planner, cat lover and would spend the rest of her life in PJ’s if it was socially acceptable.

Steffan has twin sisters, Sasha and Alexa, and has the most-generous, considerate and patient parents in the world.